My name is Naums, and this is my blog about the project called “The Sensor Organism“. The project is organized and sponsored by the YCCSA Summer School programme at the University of York. TL;DR – my project is about modelling biological processes using Arduino and XBee; the goal is to either benefit from the overwhelming effectiveness of some of the biological systems, or to get a biologically-accurate simulator which can help answer questions about biology. For more details on the project download the final presentation (PDF), poster (PDF) or poster abstract (PDF), and read the posts “1. About project”, “12. Model: overview” and “21. Conclusions”.

There are a few reasons for this blog to exist:

The project is supervised by the University of York’ Dr Martin A. Trefzer (profile) of the Department of Electronics and Dr Dimitris Lagos (profile) of the Department of Biology, HYMS and CII. I am very thankful for the scholarship to the York Centre for Complex Systems Analysis (YCCSA) (homepage).
You are welcome to read my short bio; find me on Facebook and LinkedIn. A few examples of my work are available on GitHub. Do contact me in comments or via email (naums.mogers@gmail.com) if you have any questions or suggestions!

END_OF_DOCUMENT_TOKEN_TO_BE_REPLACED

The hard outputs of this project are:

Further work and suggested model improvements are outlined in the project presentation; I plan to continue working on the code for some time until a proof-of-concept prototype is delivered.

I am very confident in saying that it was a highly rewarding project and during this summer I have learned quite a bit:

Overall, I couldn’t wish for a more rewarding summer. I was given an opportunity and help in choosing both a problem and an approach to solving it, which was a chance to explore my interests and learn something new. One of the reasons I originally applied for this program was to see whether an academic environment is where I can see myself in the future – and this project turned out a perfect opportunity to find this out. It has certainly made academic research – and bioinformatics – very appealing to me, which will affect my future career choices. For this I have to thank my supervisors Martin Trefzer and Dimitris Lagos, and everybody at YCCSA who made the Summer School happen. Thank you all!

For the final day of the YCCSA Summer School program I have prepared a 10-minute presentation and a poster. Both are a brief summary of what I wrote in previous posts starting from “11. Literature review: GRN“. You can download the PDF files through the links below: 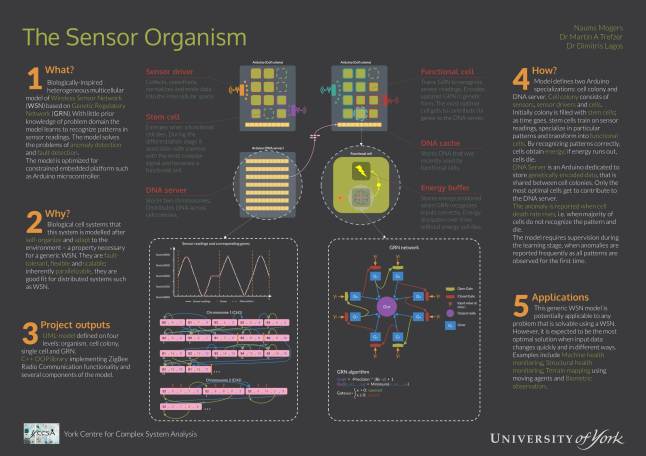 While I was working on the prototype I ran across several good tools for Arduino development that replace the standard Arduino IDE.

http://platformio.org/
Command-line code builder for embedded systems including Arduino. Written in Python, it is cross-platform and very easy to install. Initializing a new project is a matter of one command:

Then the code can be compiled (and uploaded into Arduino, if auto-upload is switched ON) using just run command:

Syntax-highlighted output reports all compilation errors/warnings, as well as Arduino memory usage. Here is a screenshot of two example Platformio outputs (click the image to enlarge):

In the first run Platformio reported no errors and (excessive) Arduino memory usage; before the second run I randomly inserted a symbol in the code, so Platformio threw an error. Memory usage is a very useful metric that allows you to check if the code fits in your hardware without actually uploading it.

Overall, using Platformio you can ditch the uncomfortable Arduino IDE and use the IDE of your choice.

https://c9.io/
Cloud9 is a great cloud IDE for development in a range of different languages. For each of your projects you get a separate Ubuntu VM  that you control purely via browser: the IDE seems to be implemented in HTML5 or something as light-weight, that requires very little traffic. The IDE provides a good editor with all the standard features and a console, which you can use to install any packages you need – for example, Platformio.

Here is a screenshot of my Cloud9 workspace (click the image to enlarge): 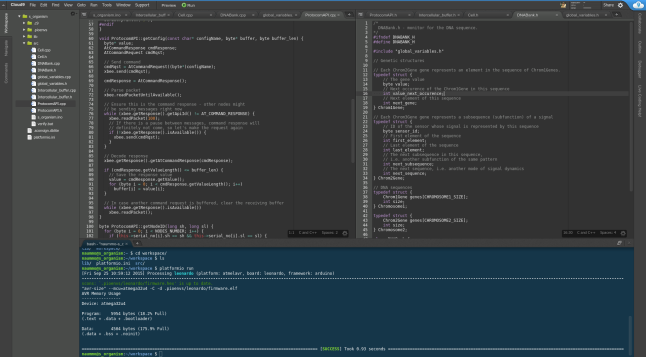 Cloud9 has paid plans, but the free one also allows you to create one or two workspaces. Here are the free features I liked the most:

In terms of hardware, on the free plan I got:

Great processing power and just enough memory space to work on a small to medium project.

One thing that I missed that is supported only in a paid plan is an ability to connect to the VM remotely through SSH – I failed to set up University’s VPN on the VM and without SSH couldn’t set up a routine on my office PC to commit code from the VM to the internally-hosted git.

While I used Platformio on Cloud9 to only compile the code, it should be possible to route its output to a local machine with attached Arduinos to program them from VM.

Overall, Cloud9 allowed me to code outside the office: at home and even on the train with very poor Internet connection. On exit the session is paused, so next time I resumed right from where I stopped.

https://codebender.cc/
Cloud Arduino IDE, which installs a Chrome Extension that allows you to upload your code to the physical Arduino. Haven’t actually used it as registration can only be done when Arduino is plugged in – and I was on the move – but in case it is difficult to program physical Arduino from Cloud 9, Codebender might be a good alternative.

Among other things, our Sensor Organism model is a multi-agent system. Such systems often possess a very useful property of self-organization (SO), and in this post I’d like to explain why our model has this property as well.

Works by Bonabeau et al [1] and Garnier et al [2] define self-organization as follows: self-organization is a set of rules governing functioning of the lower-level constituents of a system whereby global patterns appear without components explicitly referencing the global context. In other words, the system as whole possesses useful properties that are not expressed by any single object.

Components and their instances in our model

There are four components basic to self-organization [1] [2]:

While we are at it, let’s think about what self-organization gives to our solution. As described by Bonabeau et al [1] and Garnier et al [2], self-organized system can possess following properties:

Self-organization is what endows our system with the ability to create good solutions without any complex mathematics; this post is an attempt to discuss this trait in a more or less formal way.

Some of this material is based on the “Self-organization” paragraph of my Bachelors dissertation. Partial report, source code and demo of my project are available on GitHub.

All GRN-related information is stored in two chromosomes, which are multi-linked lists. This encoding is inspired by Cartesian Genetic Programming (read more in one of my previous posts as well as on cartesiangp.co.uk).

Image below is an example of pattern encoding. On the chart we have 3 patterns: 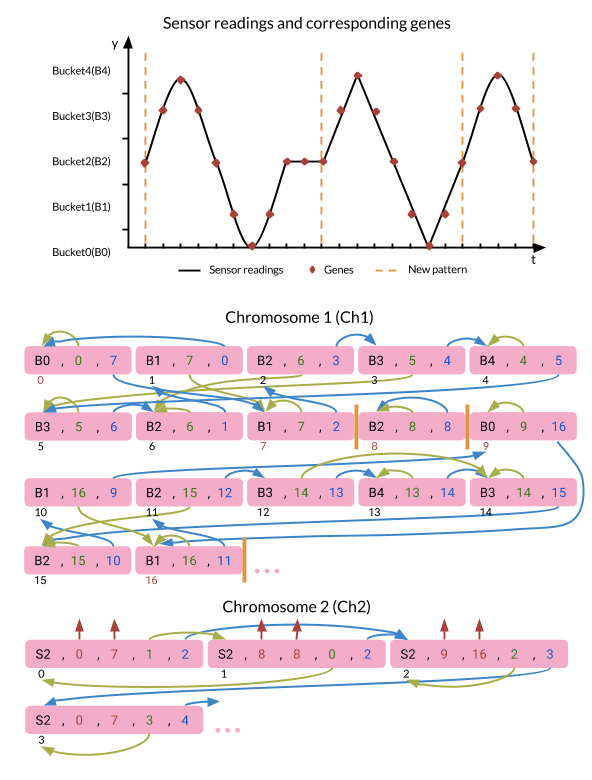 As you can see, Ch2 is a direct translation of the facts above: there are four Ch2 genes for each sub-pattern, next sub-pattern of Gene 0 is Gene 1, genes 2 and 3 don’t have sub-patterns other than themselves, and Gene 3 points to the same Ch1 sequence as Gene 1.

The abundance of pointers is necessary to be able to traverse the GRN in the way described in my previous post, however we can get rid of some of them without having to sacrifice much computational power on traversal.

Here is the same example from above with an optimized encoding: 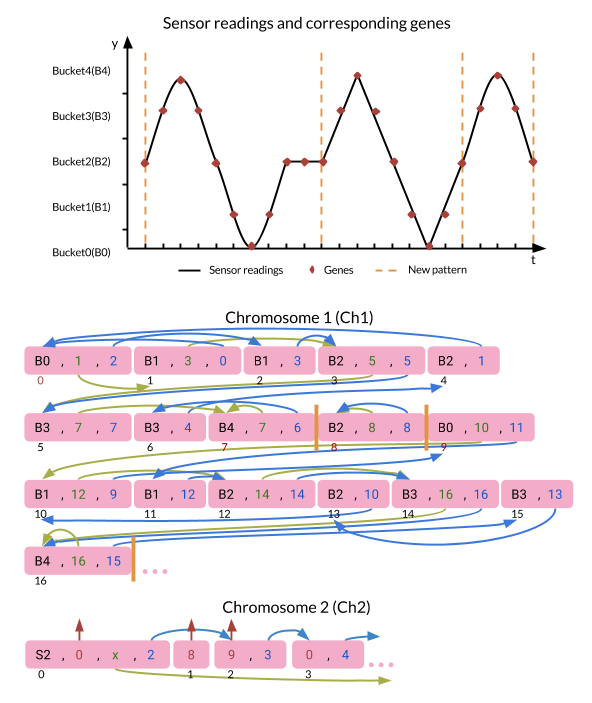 For a general description of GRNs, read my post “Gene Regulatory Networks”. This post is about the specific variation of GRN that we use in this project.

Within this model I put GRN on a genetic level not to overcomplicate things, however, to be more precise, GRN is actually an epigenetic mechanism as it is an algorithm of traversing the gene sequence. 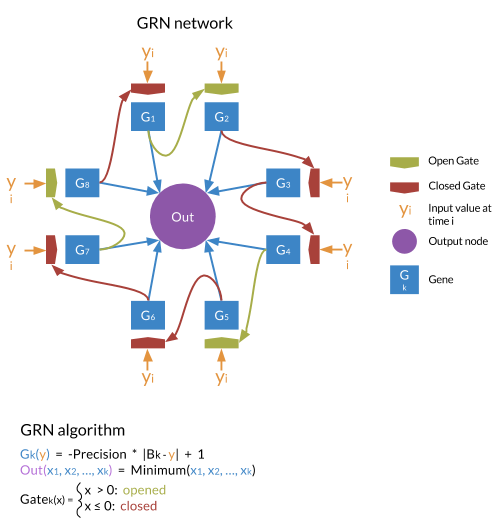 Our GRN consists of the following components:

Algorithms of the components are defined a bit more formally on the image above.

Notice the looping of the gate opening signal channels – it represents the fact that this GRN encodes periodic functions.

Here is a small worked example to demonstrate how the GRN operates. This GRN encodes a sinusoid function.

(Images above enlarge on click, the steps below are copied in the image descriptions)

Stem cells fill the colony on initialization and take place of functional cells once the latter die. Their only task is to differentiate, namely:

Once the stem cell is differentiated, it becomes a functional cell. 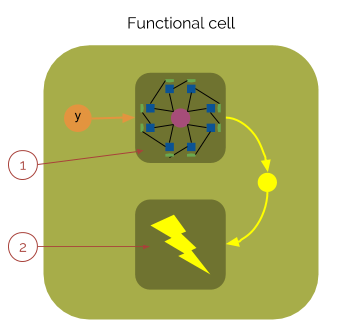 In real life cells survive by acquiring resources from the environment and converting them efficiently into the energy. Here we use the same metaphor: instead of proper metabolism, our virtual cells perform a function that is useful to us and, cruelly enough, they have to do our job good enough to survive. Cells running out of energy means that the data changed in such a way that cell can no longer perform its function, which might be an indicator of an anomaly.

There are two types of organs: DNA server and Cell colony. 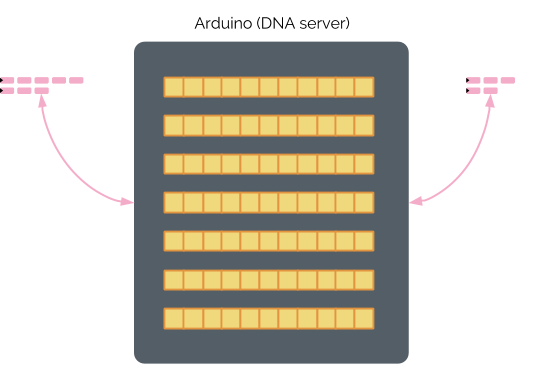 Simple auxiliary organ for storing genetic sequences, a DNA server solves the problem of the constrained memory size of Arduino (2.5 KB of RAM). Like a regular server, it waits for requests, which can be of one of two types: 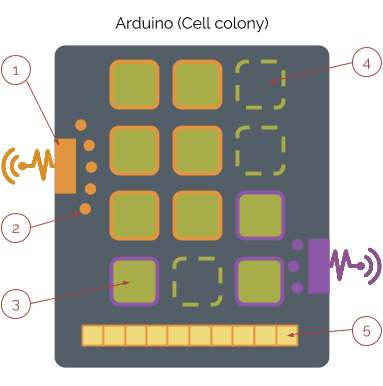 Cell colony is an Arduino that is responsible for collecting and preprocessing sensor data, as well as learning and recognizing patterns. It consists of the following elements:

The complexity of the signal – and the directly proportional number of signalling molecules – defines the number of cells that can differentiate to a particular sensor. If the signal is complex, we want more candidate solutions in hope that it will increase the chances of finding the optimal solution – in other words, we want more cells to process the same signal. When the complexity parameter is decreased, new stem cells don’t differentiate to the respective sensor if there is already a sufficient number of cells that are differentiated to the respective sensor.

When sensor signal suddenly changes in a way that was not previously observed, functional cells start to die. By monitoring the death rate we get a characteristic that is system health; low health is an indicator of either an anomaly or a faulty sensor.

This observation has at least two consequences: 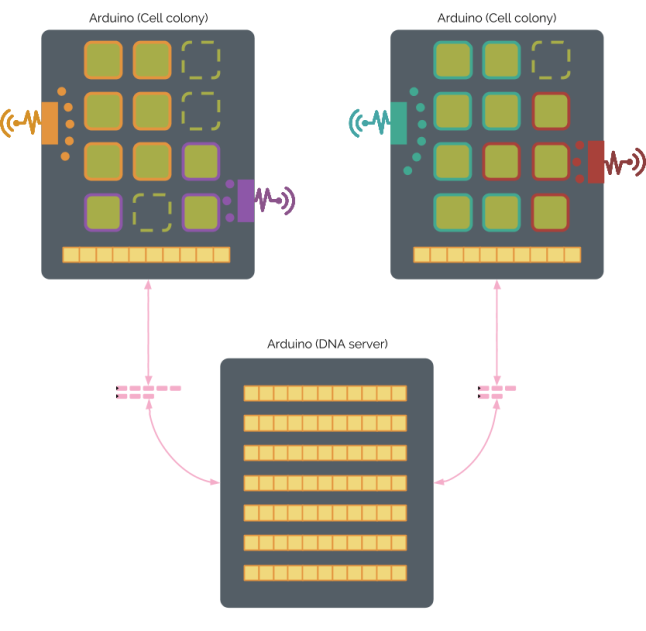 On the organism level the system consists of multiple organs (Arduinos), each belonging to one of two types:

It is the cell colonies that perform the main function of the system, namely anomaly/fault detection. Each cell colony has a characteristic of health, which changes depending on how well the colony recognizes patterns in the sensor data.

The reason we need DNA server is following: a cell colony simply doesn’t have enough memory left to store all the lengthy genetic sequences in its mere 2.5 KB of RAM. Instead the system dedicates one or more Arduinos to just storing the DNA. On the bright side of this hardly elegant solution, it would be easy to expand this model if we decide to add some genetic code optimization mechanism – something running in the background and reducing DNA size.

Couple of weeks have passed and now I finally have a model. I present to you… the Sensor Organism! In the following few posts I will outline the model on each of the four levels it is defined on, namely: organism, organ, cell and genetics. 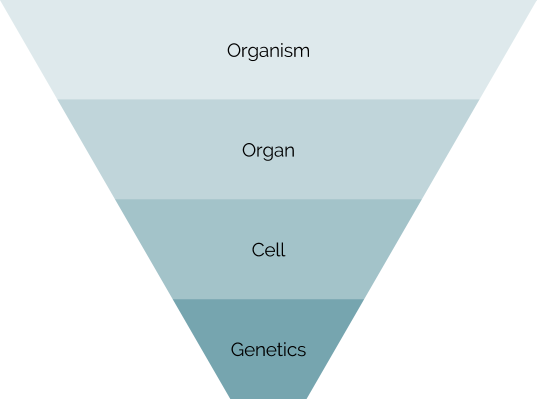 The model describes an Artificial Developmental System (wiki) with all perks of the genre:

Each level of the model is described in detail in the following posts:

Finally, a brief analysis of the model in the context of self-organisation is in the post “18. Self-organization“.